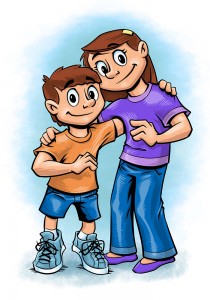 I’m Sophie and I’m 9 ½. Connor’s my little brother and he’s 7. A little over two years ago Connor and I were playing in Grandma and Grandpa’s back yard when our parents got back from another doctor’s appointment. They had been going to a LOT of doctors’ appointments. I remember that day really clearly. Mom said she had something important to tell us. “The doctors today told us that Daddy has a sick brain,” Mom said. “His brain isn’t working the way it used to. That’s why Dad is having trouble with so many things that used to be easy for him.” We didn’t know what she meant by him having a “sick brain,” but sure knew something was wrong.

Mom says he had problems for a while, which we kind of knew already. Dad’s a great guy who loved us – and Mom – and always played with us after work. But then he started being really mean and doing crazy things like getting lost and spending too much money.

One night, after Dad had a really bad day, Mom told us that he has something called FTD. F-T-D stands for frontotemporal degeneration. Phew! That’s a mouthful!  It’s a brain disease that causes people to act, think and behave differently. We were super upset when we found out that our dad was sick, but at least now we knew WHY Dad had changed so much.

At first I tried to avoid Dad because he always seemed mad and would yell about the littlest things- which he never used to. Mom used to take us to school and pick us up and cook dinner, but now she goes to work every day. Connor and I joke that mom used to be home to do everything and now dad is home and doesn’t do anything (and Dad sometimes causes even more trouble than Connor!).

Connor thinks I’m really bossy now because I’m “in charge” of starting dinner, helping with laundry and making sure homework gets done. I still play soccer because my best friend who lives next door is on the team and her mom drives us. I do things for Dad, but don’t know what to say or how to act around him any more. Seeing him sick makes me sad. I’ve gotten really close to my mom this past year.

Connor is quieter than me and doesn’t remember the happier Dad from before. He sees pictures of Dad hugging and holding him and coaching his four-year-old flag football team and it looks like a totally different man he hardly knows. Connor likes that Grandpa is there when he gets home from school. Grandpa says he’s around a lot now “because your Dad is trying to teach me a thing or two.” Connor knows this isn’t true but would never say anything because he wouldn’t want to hurt Grandpa’s feelings.

Connor knows it’s weird that he’s getting smarter than Dad. Connor can now add double digits and Dad can’t. Connor told me when he realized this but was really confused and will never tell anyone else. It’s kind of embarrassing. But Connor likes hanging out with Dad a lot. Dad doesn’t say much and when he does talk, it doesn’t always make sense. Connor doesn’t mind because he thinks Dad is a great listener. They walk the dog together. It used to be Dad’s job, but now Connor does it and takes Dad. 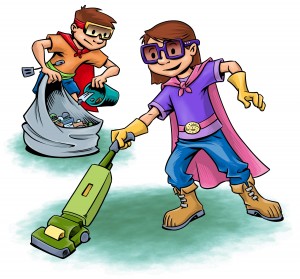 Connor still loves to dress up. He comes up with outrageous outfits made out of unexpected things and can still make Dad laugh sometimes. Connor also likes that he’s now in charge of the remote control, but that’s because Dad can’t figure out how to play the Wii anymore and gets really frustrated trying. Connor still likes it when they play together.

It’s not fair that we have to do more stuff at home, but Connor really HATES it. He still has to set the table and help with dishes but now does some stuff that Dad used to do. Now Connor takes out the trash and walks the dog. And he gives Mom a hard time about it. “I’m just a KID!” he screamed at her just last week. Then he felt bad right away. Mom seems really tired…and sad. We see Mom sitting by Dad at night watching TV. She rests her head on his shoulder but they never talk to each other.

Learning that Dad has FTD was kind of a shock, but at the same time things seemed to make a whole lot more sense.  We know he can’t control the strange things he does and so lots of other things have to change to make life OK.

The other night, Mom called Connor and me into the living room. It was Connor’s bedtime, which meant that whatever she had to say was important. She told us Dad isn’t the only one with a sick brain. There are other dads and moms who have FTD… AND have kids like us…all around the world. Mom said these kids need somebody to help them not feel so lonely and help them deal with a sick parent.

Later that night, when it was just us, I climbed up to the top bunk and woke up Connor with a shake. “We can DO this!” I said.

“Do what?!?” Connor said sleepily.

“Show other kids the way.” 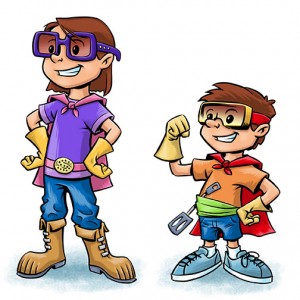 He knew I was serious, but wasn’t so sure. “Only Santa Claus or a super hero could do this. How can we get to all those kids and teach them what we know?” he asked.

That gave me an idea. “Exactly.”

“Exactly what, Soph?” he said. “You’re kinda freaking me out.”

“Listen to me, Connor. We have all the makings of a Super Hero team. We have a villain, or something to fight: FTD. We have superpowers: knowledge and love. I have a sidekick: you. All we need are outfits.”

Connor thought about it for a while. Then, he looked up and I knew he was inspired and he was in. “Leave the Super Hero costumes to me,” he exclaimed.

Leave it to my crazy little brother to get in on doing something outrageous — and important, and powerful. Then that very night, we knew we had a mission – we could change the world by helping kids who also had to fight FTD.